To survive in your survival world in Minecraft, the most vital resource you need is food. Without it, you will not be able to naturally regain health, you will lose your ability to sprint, and you can starve to death. With all of these weaknesses, you cannot stand against a foe for long. Thankfully, it is fairly easy to gather and make food. There are a lot of ways to get it, from making bread using wheat, to the meat from animals such as cows, pigs, and sheep.

However, not all food items are easy to obtain. Some, like the golden apples and golden carrots, are mostly seen and crafted when you have access to higher technologies. Others, like the cake, require a lot of materials to make. Meanwhile, certain food items combine the worst from both: they require a lot of materials that are rare or can be accessed with higher technologies—for example, the rabbit stew.

Still, the rabbit stew packs a lot in its bite. In fact, it restores more hunger and total food points than nearly every other food item. If resources are abundant, then why not make one yourself? Since it is rarely made by players, most of the time, the players tend to forget how to make one, and this guide will help you do just that.

What does rabbit stew do in Minecraft? 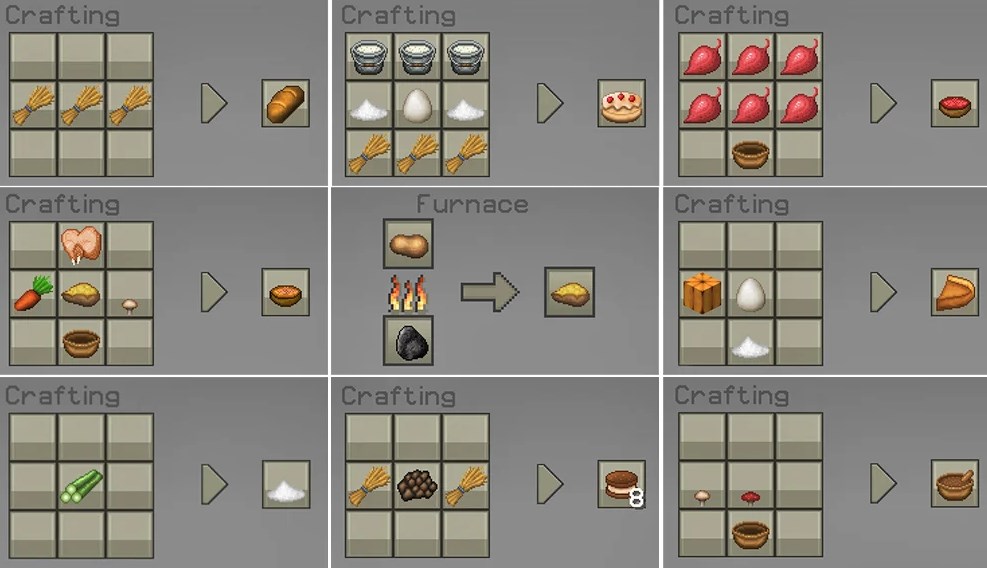 Rabbit stew is a food item that restores hunger and hunger saturation when eaten. Hunger, in Minecraft, is the value shown on the heads-up display similar to the health bar. Whereas health bars are represented by hearts, a player’s hunger value is represented by meat drumsticks.

The hunger value is important in terms of health regeneration, ability to sprint, and starvation. Having eight and a half drumsticks left will disable a player’s natural health regeneration. Having three of them or below disables a player’s sprinting ability. When it reaches zero (which is only possible on hard mode), you start to lose hearts, and you will die from starvation.

Hunger saturation, on the other hand, is another value that, in general, dictates how fast or how slow the hunger bar depletes. Its value depends on what kind of food you are eating and what you are doing. Some activities, such as swimming, breaking a block, sprinting, and jumping, will decrease a player’s hunger saturation by a lot.

Rabbit stew recovers five drumsticks and adds 12 saturation points to the player’s hunger saturation. So, eating two of these would instantly give you a full hunger bar as well as high saturation points. When you eat a rabbit stew, you will be left with an empty bowl in your inventory. You can use this bowl again to make another rabbit stew.

How to make rabbit stew in Minecraft

Why is this hard to find? Well, to begin with, carrots and potatoes are hard to come by unless you stumble upon a village that has a farm consisting of these harvests, or if you luckily managed to obtain them while fighting a zombie. There are other methods to get them, which will be discussed in a later section. Rabbits are hard to deal with, so that is another thing that you might find difficult to do.

This guide is divided into sections that will help you in gathering the materials you need. So, if you already have certain materials with you but you are missing some of them, then find the sections that will guide you through obtaining the missing items. For example, if you already have a bowl and a cooked rabbit but you do not have a baked potato, a carrot, and a mushroom, then you can find the guides on obtaining these three items here.

If you already have the materials and you just want to know how to make a rabbit stew, you can jump directly to the “recipe for rabbit stew” section. There, the recipe is available, as well as a step-by-step guide on how to do it. Note that the following guides assume that you already have a crafting table. If you still do not have a crafting table, follow the steps below.

How to get a cooked rabbit 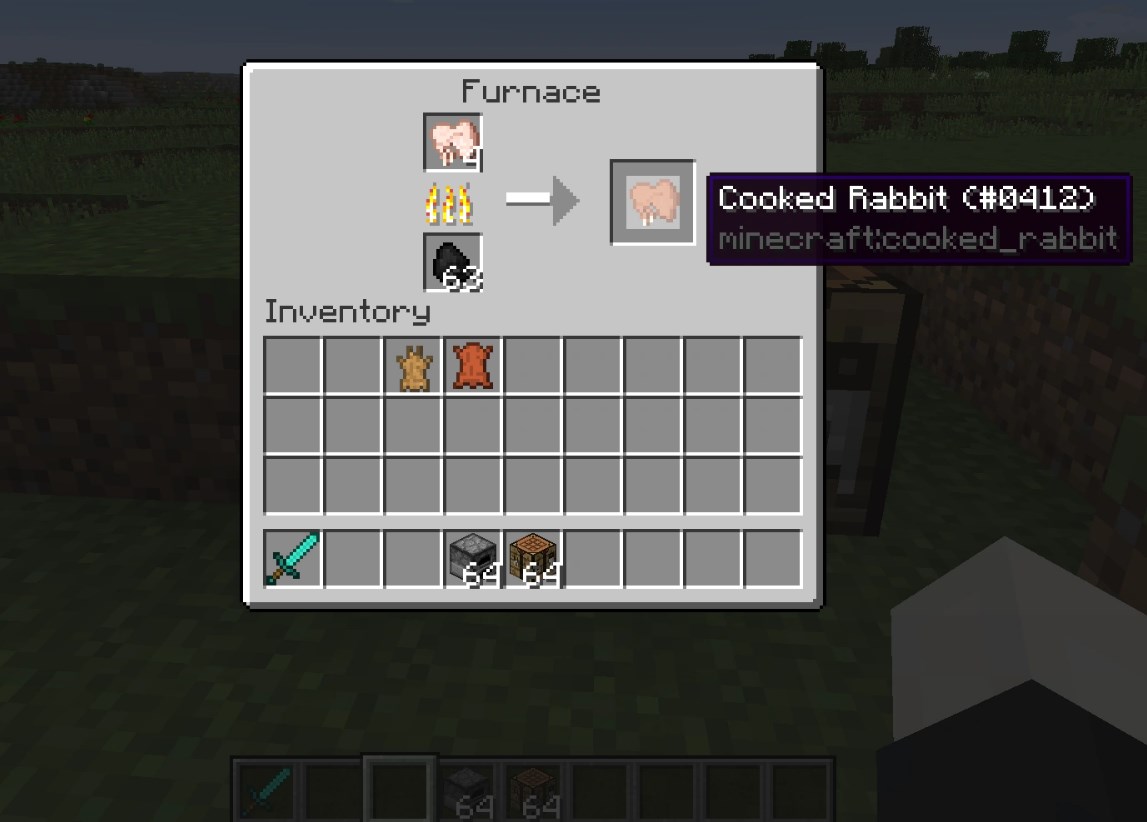 To get a cooked rabbit, you must first have these:

Step 1: Get a raw rabbit

Raw rabbits can be dropped from killing rabbits, although there is also a chance that killing them will drop nothing. They are relatively weak, only having one and a half hearts in their health bar. However, they are quite small, so hitting them might be a challenge. Plus, it can get even more difficult since they will avoid players within eight blocks of them.

They usually spawn in groups, and they are found in the following biomes:

Once you do find rabbits, you need to kill them to harvest their meat. They will avoid players within eight blocks of them, so it is best to lure them towards you while holding a carrot, golden carrot, or dandelion. Since rabbits are so weak, you can kill them in one hit using at least a wooden sword. Again, upon a rabbit’s death, there is a chance that it will drop one raw rabbit, but there is also a chance that there will be no drops at all.

If your sword is enchanted with Looting, the maximum amount of raw rabbits you can get increases by one for each level of the enchantment. For example, a Looting III sword can give you at most four raw rabbits. Furthermore, if the rabbit is killed by fire, such as through weapon enchantments, then it will drop a cooked rabbit instead of a raw rabbit.

Step 2: Make a furnace and get fuel 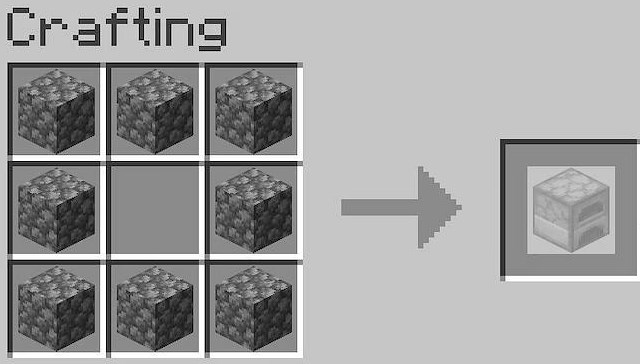 You need to cook your raw rabbit so that it can be used for the rabbit stew. If you got a cooked rabbit instead of a raw rabbit by killing it using fire, then you can entirely skip this step and the next one. To make a furnace, you would need:

Then, place the furnace so that you can use it. When you open the surface, you can see that there are two tiles aligned vertically, as well as one single tile beside them. The tile above is the material that you want to cook or smelt, the tile below is the fuel to cook or smelt, and the tile beside the two is the output tile. To cook your raw rabbit, you need fuel. Fuel comes in many different shapes and sizes. Examples of sources of fuel are listed down below.

Another alternative for a furnace would be a smoker. Smokers are intended for cooking food items, and cooking would take much faster than a furnace. However, if you are planning on cooking only one raw rabbit, then a smoker might be unnecessary. But if you still want to make a smoker, you can follow the steps below.

When you have your furnace, fuel, and raw rabbit, simply put your raw rabbit on the tile above and your fuel on the tile below. The furnace will light up as it uses up your fuel. Wait for a while; then you can get your cooked rabbit. Drag the cooked rabbit from the output tile into your inventory.

How to get a carrot 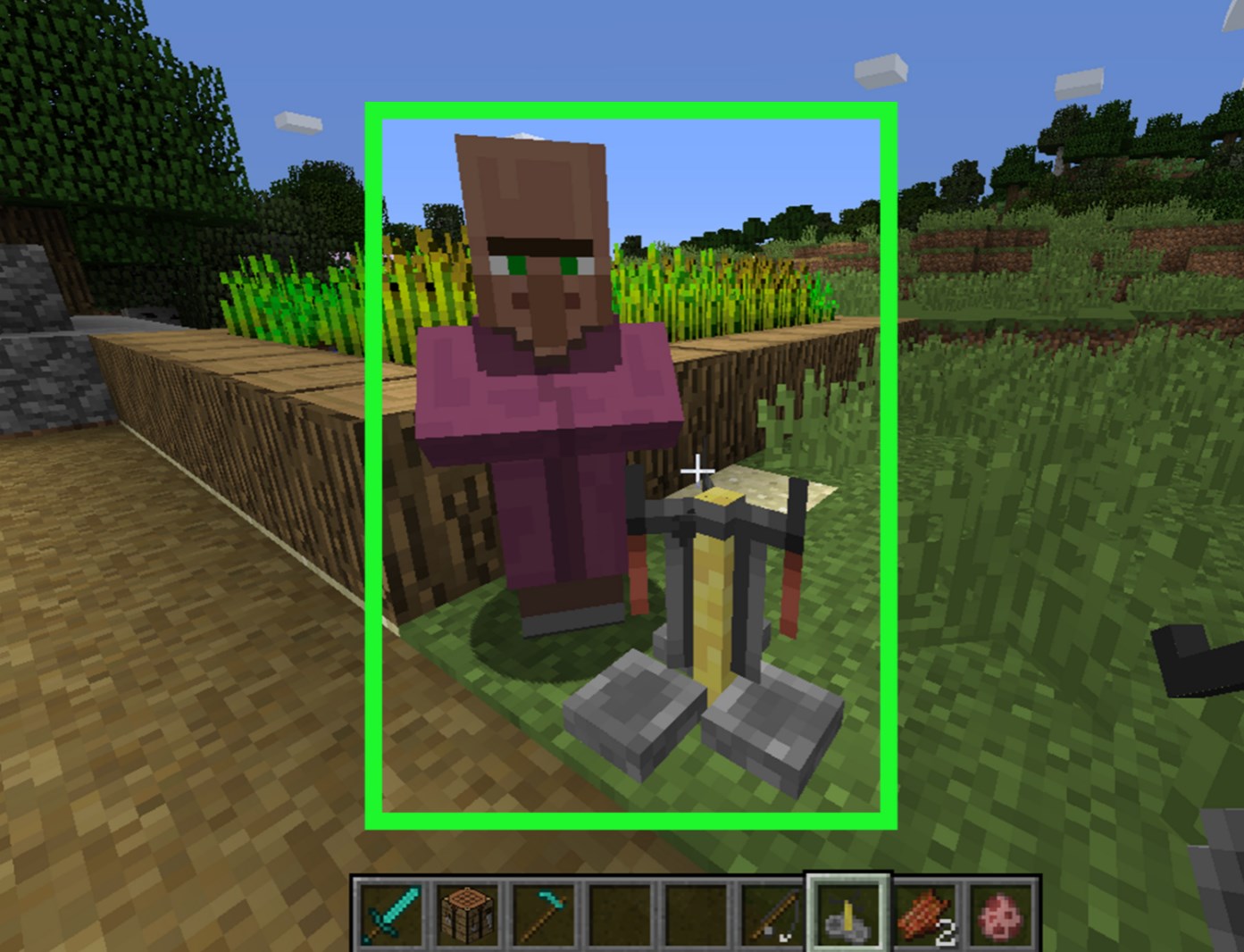 Carrots are rare to come by until you encounter a village, where carrots are common in farms. Village farms have a 20% chance of having carrots being planted and farmed. When you have a carrot, you can plant them again to make more carrots.

Another way to get a carrot is by getting them from zombies, husks, and zombie villagers as mob drops. However, it can be extremely rare. When you kill them, there is a 0.83% chance of dropping a carrot. If the attacking weapon has the Looting enchantment, the chance increases by 1% for every level of Looting.

How to get a baked potato

Much like carrots, potatoes are hard to come by until you encounter a village. They are common in village farms, having the same chances (20%) of carrots in terms of being planted and farmed. And much like the carrot, you can also plant them again to make more potatoes. Potatoes also have the same chances of dropping as mod drops from zombies, husks, and zombie villagers with carrots.

Once you have your potato, you must bake them. It is done similarly to cooking a raw rabbit. If you do not have a furnace or a smoker, you can follow the steps in the “how to get a cooked rabbit” section to make one.

How to get a mushroom 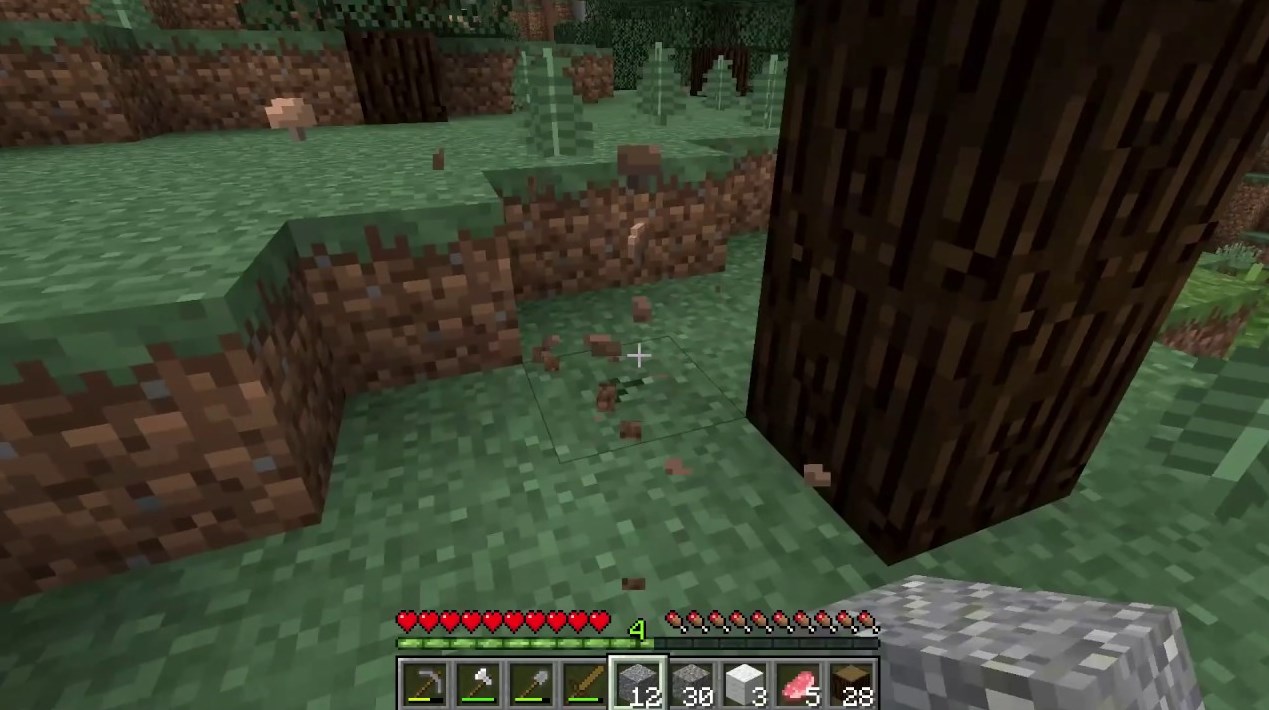 To get mushrooms, you need to break or mine them. They can easily be broken and can be mined with anything, even your fists. There are two types of mushrooms: red mushrooms and brown mushrooms. However, when making a rabbit stew, either of them can be used.

Mushrooms can generate in poorly lit areas, most commonly in caves. They can also be generated on the surface in swamps, giant tree taigas, and mushroom fields. They can be spotted in the Nether as well. If you want a challenge, you can get them from witch huts (they have a mushroom in a flower pot) and in woodland mansions (they have “mushroom farm” rooms).

If you have a mooshroom, which are cows covered in mushrooms, you can shear them to get their corresponding mushrooms. In doing so, they turn into regular cows. Finally, mushrooms can be traded with an emerald through wandering traders, though it is quite a bit inefficient since mushrooms are common in caves while emeralds are rare to come by.

How to get a bowl

In contrast, bowls are the easiest to get because you can craft them using only planks. To make them, you need:

Then, follow the steps below to craft a bowl.

Now, you have your bowl. Bowls can also be obtained through other means. There is a chance that you can fish them up as junk. If you have a stew food item with you, eating it would result in an empty bowl. You can use this bowl to make a rabbit stew. In rare instances, when lightning strikes on a turtle, a bowl is dropped. 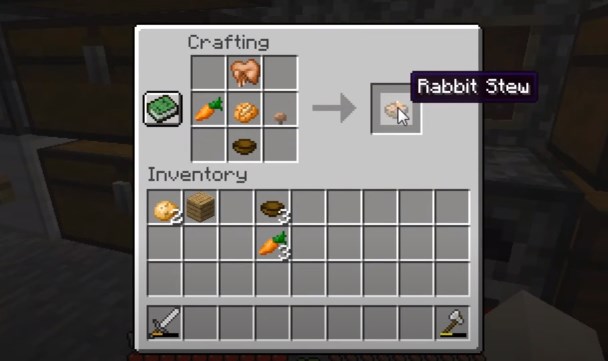 Once you have all the ingredients, need as listed above, follow the instructions below to make your rabbit stew.

So now, you have your rabbit stew!

How to get rabbit stew through other Methods in Minecraft

Answer: Yes, many say that rabbit stew is worth it in Minecraft. Rabbit stew restores more hunger than any other food type (except for cake). However, it offers fewer saturation points to players compared to golden carrots, cooked pork chops, or steaks. One could say that the rabbit stew’s biggest weakness is its ingredients being so hard to get, but if you are abundant in them, then it would be worth it. Another weakness is that they do not stack, making it a hassle to bring.

Question: How much hunger does rabbit stew heal?

Question: Can you craft a rabbit stew in Minecraft?

Answer: Yes. In fact, it is one out of the only two ways of getting a rabbit stew. The recipe can be found in this guide, as well as the steps on how to get its ingredients.

Question: Can rabbit stew be stacked?

Answer: No, it cannot.