Minecraft is a game about building when you’re not surviving, and so wonderful creations from around the world have inspired others to do the same. If you have played a creative game and are trying to make builds, you would come to learn one thing: something that adds depth to a player’s build is variety. You can even see this principle being applied to popular builds out there.

A house plainly made out of stone bricks or planks alone would fall flat in terms of design. You need to add variety to the scene. Of course, not all blocks blend well with each other. If you are trying to make a stone-only build such as a stone pyramid, you would not add dirt blocks for variety. One variant that would work well in that situation could be cracked stone bricks.

Cracked stone bricks are not new blocks, as they have existed since the game’s first version. However, the ways of obtaining them became much easier during the 1.8 updates. What are these blocks, and how can a player get one? Read more to find out.

How To Make Cracked Stone Bricks in Minecraft 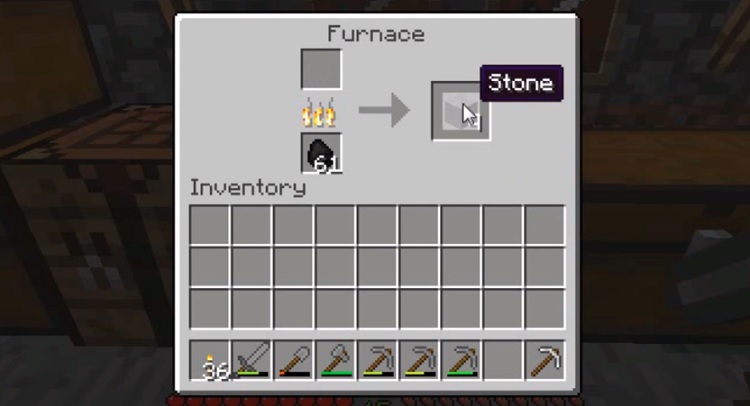 The first thing that you need to do is acquire a crafting table. Crafting tables are essential tools to enhance one’s crafting capabilities. While you do not need a crafting table to make cracked stones directly, you still need it to craft other tools needed, such as your pickaxe or furnace. To make a crafting table, you need:

Follow these procedures to get the resources you need to create your crafting table:

Now that you have a crafting table in your inventory, you can use it. Just place it on the ground and then open it. For PC, you can open it by right-clicking on the crafting table. Other consoles and devices may differ when it comes to opening the crafting table, but a tooltip would usually be visible to notify you. 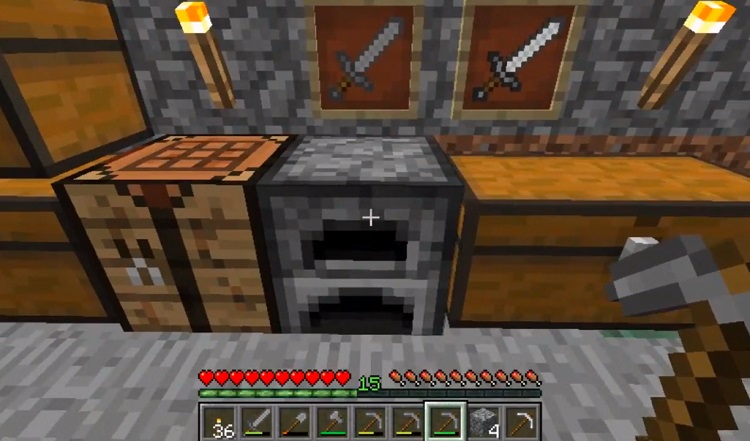 To get these materials, follow the procedure below. Note that this procedure assumes that have gathered at least three logs of any variety during the previous section.

Because you used a single log to make the crafting table, you are left with two of them. These two logs are sufficient to make a wooden pickaxe. If you did not go through the previous step, make sure to gather at least two wooden logs of any variety.

You now have your wooden pickaxe. Be sure to put it in your hot bar (the bar with nine tiles at the bottom) so that you can equip it.

Step 3: Gather the Stone You Require

Now that you have a pickaxe, it is time to collect stone. Note that when you mine stone using your pickaxe, cobblestone will be dropped instead of stone; that is perfectly normal and is intended to be that way.

However, there is also a way to turn that cobblestone into stone once more. However, the guide has not reached that part yet, as this part talks about gathering the stones you require.

Stone is a very common block. They can be found a few layers beneath the dirt you walk on. So, you can dig for it easily. Just remember to not dig straight down as large caves might just be below you and if you mine straight down, you might plunge yourself to death.

If you are not a fan of simple mathematics, then you can just simply gather as many stones until your pickaxe breaks. If the stones mined are not enough, then you can go back to mining again. Yet if you want a precise number so that you will not go back and forth, you can calculate the specific amount by considering the following:

Having these rules in mind, this equation can be formed:

For example, you need 18 cracked stone bricks. 18 is not divisible by 4. So, the first process can be followed.

Thus, you need to mine at least 28 stones. If the cracked stone bricks needed is divisible by 4, like 20, you can do the simpler second process.

Step 4: Make a Furnace and Get Fuel 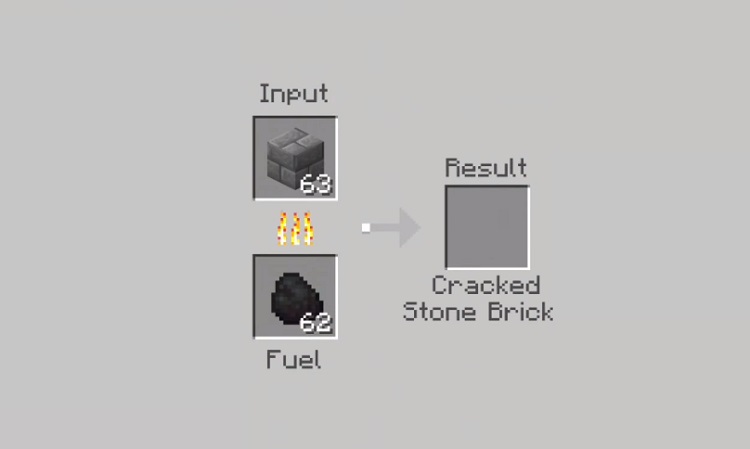 If you already have eight spare cobblestones to build a furnace as instructed from the previous step, proceed below.

Also, you need fuel for the smelting process. The amount of fuel you need really depends on what kind of fuel you have at your disposal, so just gather lots of them. Coal is a good source as there are plenty of them, but lava is much more efficient and durable.

Step 5: Smelt the Cobblestones to Stone

Now that you have your furnace, it is time to start smelting your gathered cobblestones into stones. To do so, follow the steps below.

Now, you have your stones.

Once you have your stones, you can now make stone bricks. You need to craft for them thus, you do not need to wait. In fact, you do not even need your crafting table as this process can be done using your 2×2 crafting grid. You can follow the steps below.

Now, you have your stone brick! 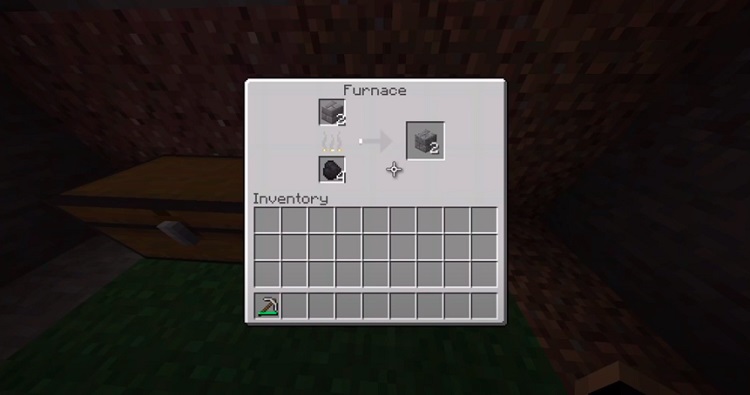 It is time to go back to the furnace. To obtain cracked stone bricks, you need to smelt the stone bricks that you got. To do so, simply do the following:

Congratulations, you just got cracked stone bricks! You can use them as decorative pieces for your builds to add depth to them. There are no definite features in using cracked stone bricks that can give them an advantage when compared to regular stone bricks, stones, and cobblestones except for its design.

How to Get Cracked Stone Bricks Through Other Methods in Minecraft

Cracked stone bricks can also be obtained from mining them. They can naturally generate in several structures. These structures include:

Much like regular stone, you only need at least a wooden pickaxe to mine them. If you have stumbled upon these structures and you have a pickaxe with you, there is a chance that you can find them.

If you do not have a pickaxe, you can follow the section about making a wooden pickaxe, specifically the “Step 2: Make a wooden pickaxe” subsection in the “How to make cracked stone bricks in Minecraft” section.

Answer: Yes, you can. At first, this was not an available feature, but the ability to make them via smelting stone bricks was introduced back in the 1.8 Java Edition update, also known as the Bountiful Update. In Pocket Edition Alpha, which was later remade to become Bedrock Edition, this feature was introduced as early as version 0.11.

Question: Can You Fix Cracked Stone Bricks in Minecraft?

Question: What Can You Do With Cracked Stone Bricks?

Answer: There is nothing that you can do with cracked stone bricks other than use them for decorative purposes.
Although you can turn its two other variants (i.e., the stone brick and the mossy stone brick) into slabs, stairs, and walls, you cannot do the same with cracked stone bricks. Plus, there really is no definite advantage of using them over regular stone or cobblestone except for its aesthetic looks.

Question: What is the Recipe for Cracked Stone Bricks?

Answer: There is no recipe for cracked stone bricks, as these blocks are smelt from stone bricks, not crafted. However, stone bricks can be crafted, and its recipe is simply four individual stones placed in a 2×2 formation.